NOTE: It's a good idea to create backer groups before importing backers. Read about how to create groups here.

To import backers from a crowdfunding campaign to the pledge manager, click the tool button in the top right corner and choose the project you want to manage from the menu on the left.
Then, go to  "Users", click  "Import users". You’ll see a window with further instructions: 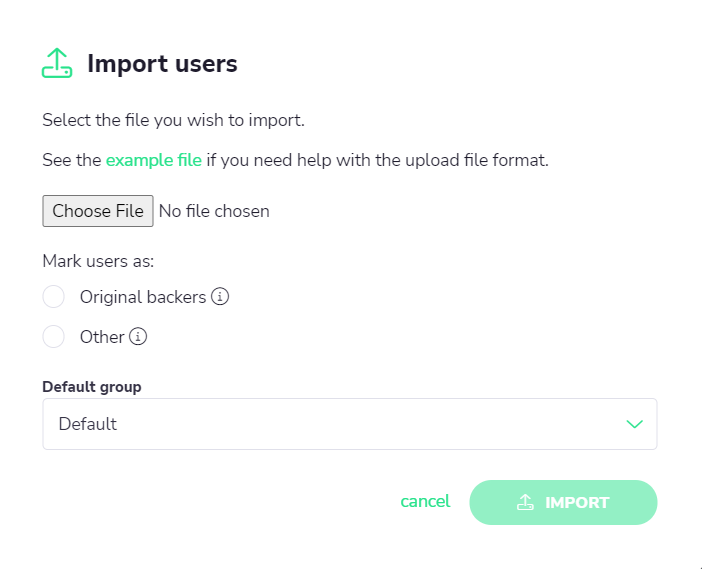 When importing backers, you can mark them as  "Original backers" meaning that these are users imported from an external crowdfunding platform. You can later filter them easily:

Or choose as a recipient group when sending updates:

Mark them as "Other" if you don't want to mark them as original backers.

In the "Default group" dropdown menu you can choose to which group the imported backers will be added. If you added your own groups, you will be able to choose them on this list. If not, only the  "Default" group will be available.
NOTE: We recommend making the "Default" group for late backers as this is for anyone who organically comes to your page. Creating separate groups for original backers and late pledgers makes it easier to manage them later. As you can see on the screens above, backers are automatically marked as late pledges so you can filter them easily even if they're not in a group, but you won't be able to give them for example a group discount.

Importing backers - how to create an import file

You can download the example file to see what the list should look like to avoid any problems when importing. The Excel file has to include the following:

Backer name (required) - should be the full name of the backer, it should not have any numbers or special characters ($, %, ^, etc.)

E-mail (required) - the e-mail of the user, all users will get a "welcome to project" e-mail once imported

Pledge amount (required) - the amount pledged to the project; with currency symbol or ISO code

Group - the name of the group the backer should be placed in; if you leave this empty, the backer will be imported to the "default" group

Click  "Import" after uploading the proper file. You’ll see a list of all backers of your project.
Did this answer your question? Thanks for the feedback There was a problem submitting your feedback. Please try again later.
Last updated on May 16, 2022